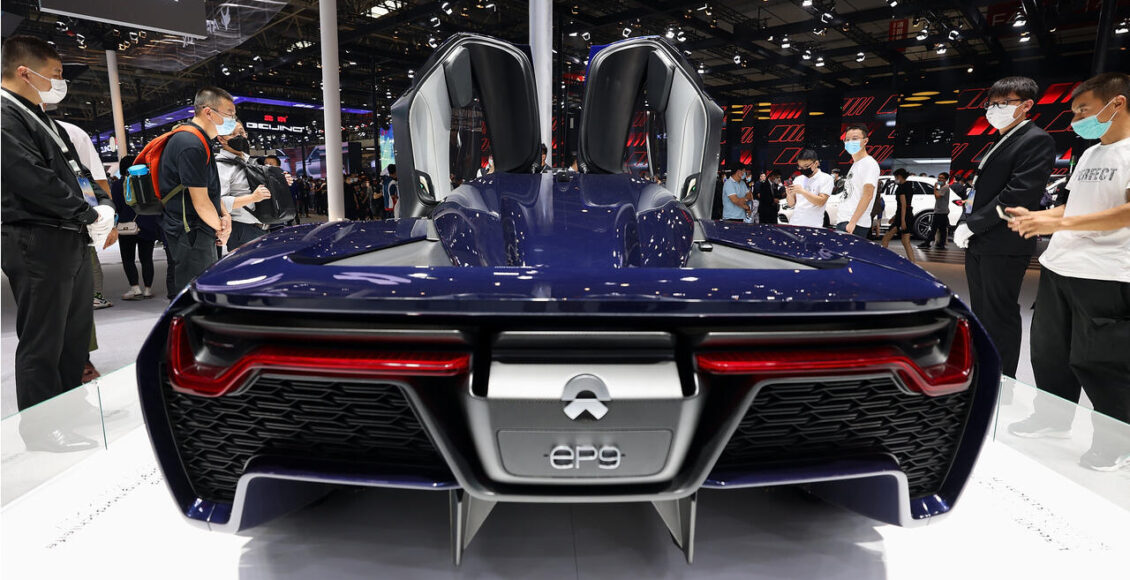 Similar to how we analyzed Palantir (PLTR) in our recent piece Palantir: The Path To A $1 Trillion Valuation, NIO Inc. (NIO) is unique in that it is already a large cap stock, but has a massive growth runway that could quite conceivably make it a mega-cap stock and eventually even approach a valuation of $1 Trillion. Here are five reasons why it could successfully achieve that valuation:

NIO is a major designer and manufacturer of high-tech electric vehicles in China and as a result competes with the likes of Tesla (TSLA) in innovative technologies like connectivity, batteries, autonomous mobility, and artificial intelligence.

NIO’s status as an emerging leader in these innovative technologies is perhaps the biggest reason to believe that they could become a multi-bagger from today’s already lofty valuation and become a true mega cap.

For example, its Battery-as-a-Service (BaaS) potential is immense. The company has already begun building out the infrastructure for this business through its recent partnership with Sinopec (SHI) through which they aspire to create a 5,000 battery swap station network by 2024. This will give NIO a decisive network advantage in this space just as it begins to really take off in the world’s largest electric vehicle market, enabling it to form partnerships with other automakers in the country and drive strong revenue growth from this business alone. Essentially, this would make NIO the number one “gas station” company in China as the country and world enter the age of electrification.

Given that they possess hundreds of patents in battery swap technology, NIO seems to already have the intellectual property moat necessary to transform this potential into reality. It appears to be merely a matter of time for them to implement and scale now.

NIO also has a strong foothold on autonomous mobility technology thanks to filing nearly 50 patents in the area and boasts AI-powered smart “cockpits.”

Given that the mobility industry is becoming increasingly software-driven, its intellectual property portfolio here is important as well. Even more important, though, is its competitive positioning to emerge as a long-term leader in the electric vehicle space in China, not only because of the vehicle sales potential it offers, but much more importantly because it is the largest source of consumer data in the world. As a result, NIO will have access to a vast amount of data with which it can improve its A.I. and build one of the best mobility software platforms in the world.

Another big reason to believe in NIO’s long-term potential stems from the simple fact that it is a leading local company in China in high-priority technology fields. As a result, it will likely enjoy significant support from the Chinese government so that it can serve as a vehicle whereby China can advance its goals towards becoming the pre-eminent global technological superpower.

This principle has already played out several times to NIO’s benefit.

For example, the government recently gave NIO a RMB7 billion (US$1b) bailout to give it the cash it needed to sustain and scale operations.

Perhaps the most glaring example of this was how the Chinese state media recently successfully harmed the reputation of TSLA – NIO’s top foreign rival – to the point where the Elon Musk-led company had to issue an apology.

Furthermore, the Chinese government is making a major push to transition the automotive market towards electric vehicles in an effort to battle its huge pollution problem. It is achieving these aims by offering purchase rebates and tax exemptions for the industry while also placing restrictions on new gasoline and diesel powered vehicle permits.

NIO is also poised to begin expanding its sales into global markets, beginning with Norway. Not only will the company be selling its cars there, but it will be building out local physical and digital infrastructure to create a high quality user-friendly ecosystem to add value to its brand and bolster its competitive positioning. Once it has built significant scale in Norway, it will then have a greater position of strength from which to infiltrate the rest of the European market. Given the geopolitical tensions with the United States at the moment as well as Tesla’s (TSLA) dominance in the U.S. electric vehicle market, Europe seems like a much more logical choice to begin global expansion.

Electric Vehicle sales are already growing exponentially – especially in China – and we expect that number to explode much higher in the years to come. 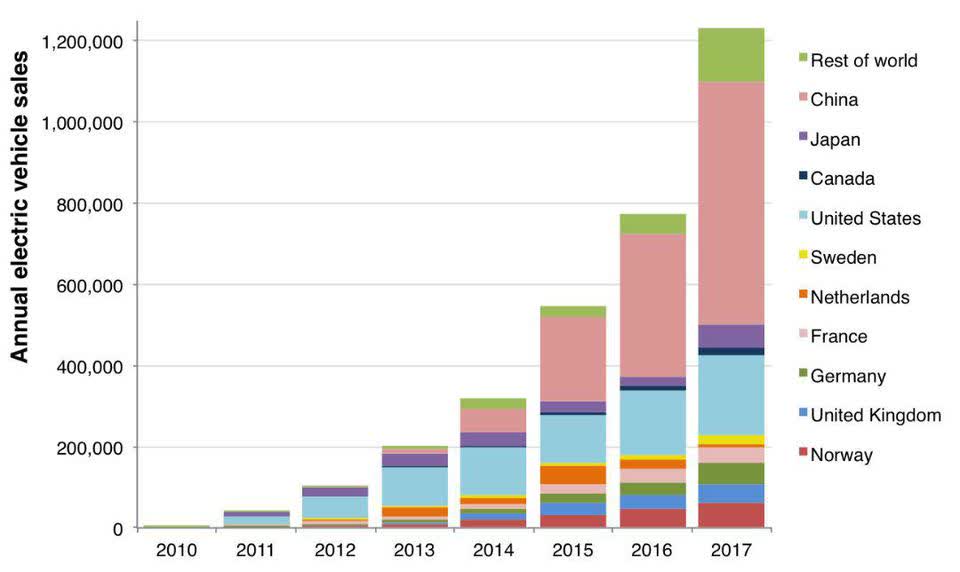 In fact, while just barely over 1.2 million electric vehicles were sold worldwide in 2017, Bloomberg New Energy Finance expects that number to soar to 60 million by 2040. Not only that, but battery and battery charging infrastructure demand will soar as well.

If NIO can seize on its early leadership in China in both the electric vehicle and battery charging infrastructure businesses and also successfully scale its business internationally, there is certainly room for it to achieve a $1 Trillion valuation by 2040. For example, its gross margin is expected to be nearly 20% in 2021 and 2022. TSLA’s gross, meanwhile, is around 23% and its net margin is roughly half of that, or ~11.5%.

NIO’s BaaS business should also be higher margin given that it could be entirely automated and the actual real estate could be leased instead of owned in order to free up capital for higher return investment elsewhere. With continued scaling in both businesses and overall positive trends in the business with reduced costs across the board through automation and enhanced data analytics, we think gross margins of 25% and net margins of 15% by 2040 are entirely feasible.

If NIO were to grab just 7.5% of the global EV market (TSLA’s is currently 11%) by 2040, it would be selling ~4.5 million cars per year. We think this share is actually very feasible when you consider that the majority of electric vehicle sales are expected to be in China and that NIO has an inside track on that market given the support it is receiving from the government.

If the average sale were for $40,000 per electric vehicle, its profit would be ~$6,000 per vehicle, translating to $27 billion in annual profit from auto sales alone. At a 30x price-to-earnings multiple, that would put the automotive business at a $810 billion valuation.

Meanwhile, its BaaS business could likely generate $150 in profits per year per vehicle in its sphere in China. By 2030, it is estimated that there will be 50 million electric vehicles on the road in China and that EVs will account for 40% of total auto sales. A very conservative estimate is that the number of EVs on the road in China will double to 100 million by 2040. If NIO’s Baas business serves 20% of the electric vehicles in China by 2040, that would equate to an additional $3+ billion in annual net income. Once again applying a 30x price-to-earnings multiple, that would equate to roughly another $100 billion in market valuation.

Meanwhile, the potential for using its data and autonomous vehicle technology as well as vast BaaS infrastructure to launch an autonomous taxi business network is also immense. While it is hard to know exactly what sort of value this would command as it is hard to project how it would be regulated by the Chinese government and how well consumers would adopt it, it is not a stretch that NIO’s scale and capabilities by this point in such a potentially massive market as is offered in China would put the valuation for this business at $100 billion.

Combining all three businesses gets us to a $1 trillion total valuation under a bullish, but not entirely implausible scenario.

While the path to $1 Trillion certainly looks viable, there are numerous risks to consider along the way.

First and foremost, NIO faces a lot of competition from both foreign and domestic companies. TSLA has a large presence in China and overseas and sports a premium brand to go along with an extremely driven and innovative CEO and engineering team. While the Chinese government has helped NIO some already with surviving the TSLA threat, it is unknown the depths that it will have to and be willing to go to continue giving NIO a boost to sustain its competitive standing in its domestic market.

Of course, NIO also faces competitive pressures from fellow Chinese electric vehicle manufacturers including Baidu (BIDU), which already has a partnership with a government-owned automaker (BAIC Group) to put 1,000 driverless cars on the roads over the next 3 years as a prelude to establishing an autonomous taxi service in China. Facing off against fellow major domestic players who also have government backing poses another threat to NIO because it means that it cannot solely rely on government assistance to survive and thrive.

On that same note, it also increases the political risk for NIO. Given that it is not the only horse that China is betting on in the mobility space, if their leadership were to run afoul of the Chinese Communist Party and/or they were to simply lag behind in performance, they could quickly be “dropped” by the government and the business could fall into a downward spiral. If Alibaba (BABA) could face this, NIO certainly could too. If nothing else, the Chinese government could easily seize some or all of NIO’s physical or intellectual property for state use, depriving NIO shareholders of much of their equity value.

Furthermore, expanding overseas could also be complicated by the fact that China is currently dealing with growing geopolitical tensions with other Asia-Pacific nations, Europe, and the United States. As a result, trade barriers may go up, especially in such high-priority technologies as mobility and autonomous technology. The U.S., Europe, Japan, Korea, and even India have well-established automobile industries and if they feel threatened by a Chinese competitor, they may well decide to throw up barriers to entry in their markets.

Of course, as the China hustle pointed out, many Chinese companies have a troubling track record of fudging accounting numbers. As a result, investors should always view Chinese company – to include NIO’s – financial numbers with a healthy dose of skepticism. While it is very possible – if not likely – that NIO’s numbers are completely accurate, it is still a risk that needs to be considered.

Last, but not least, NIO is currently priced quite expensively as it is still running up massive losses and trades at 71 times expected 2021 gross income. Therefore, the range of potential future outcomes is quite wide and investors could very well be dramatically overpaying by purchasing at today’s prices. It should be viewed as a highly speculative investment accordingly.

NIO is currently struggling to turn a profit and has had to be bailed out by the Chinese government. At the same time, its valuation is sky-high. While this might steer many investors away and the stock is indeed a very speculative investment, there is also a plausible path for the company to become a $1 trillion mega cap by 2040 and generate attractive long-term returns for investors as a result.

While not for the faint of heart and certainly not without risks, NIO could continue on its path towards becoming one of the world’s pre-eminent mobility companies.

NIO: This Is Getting Ridiculous

Lithuania to ask European leaders for support in face of…

Mainland China’s capital market will triple in size to…

I Was Wrong About Alibaba Stock