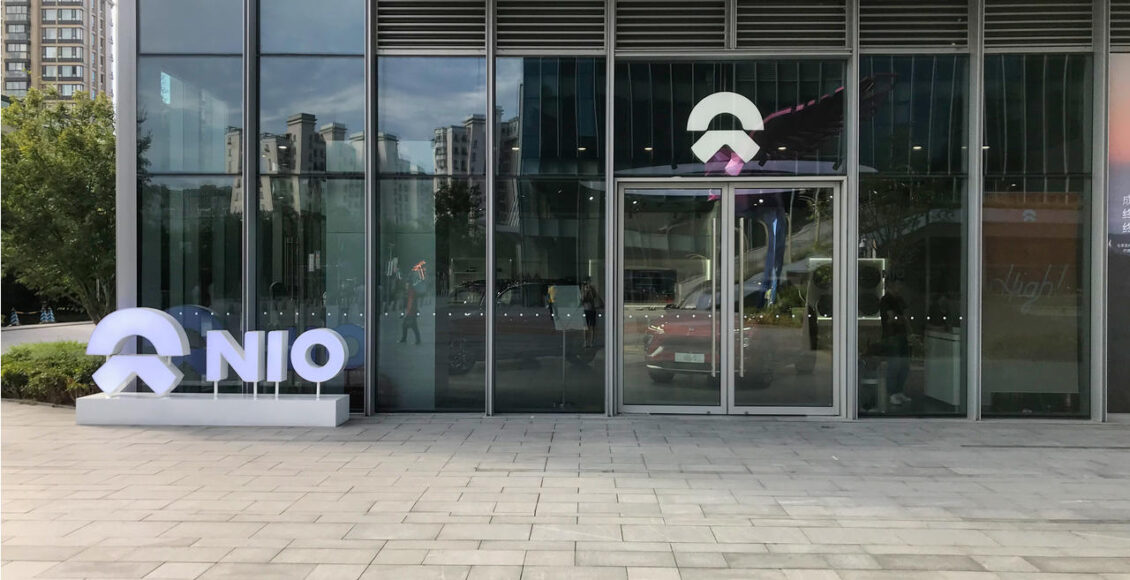 NIO was far from the largest holding in my portfolio, but has grown well over 10x since the midst of its funding issues in late 2019. This was driven by a strong post-COVID-19 rebound and further growth of its EV sales. Further optionality was introduced with capacity expansion, the new, innovative BaaS business model, and potential international expansion to Europe.

Still, one could argue that much if not all of those growth opportunities have been priced into the stock – which some have called the EV bubble. This, indeed, led me to review my position in NIO. Upon review, while there could certainly be downside, one could also argue that NIO is following a similar trajectory as Tesla.

Tesla stock had a similar success in 2020, which was capped off by its introduction in the S&P 500. This arguably supports the view that EVs are, in fact, not a bubble. NIO, in that regard, should be regarded as the Chinese Tesla, and hence poised for further growth. China is also poised to become the silicon valley of EVs and also has supportive regulation towards autonomous driving.

Nevertheless, there are many competitors in EVs, not the least in China as well (also from Tesla). However, NIO is still one of the leading start-ups positioned to capitalize on this opportunity, with its proven track record of innovation and growth.

The automotive industry is undergoing major changes. The first major trend is towards energy sustainability. This has fueled the growth of EVs. Secondly, there is a strong economic incentive towards autonomous driving (called the “passenger economy”), which will further revolutionize transportation.

This means this industry is open for disruption. This is indeed already unfolding, as can be seen in the trajectory of Tesla through the last decade, as one of the hallmarks of this.

Even though it is an old, capital intensive business, Tesla proves that investors are willing to pay up to be part of this revolution. As noted, Tesla capped this off by its S&P 500 inclusion and 500k deliveries in 2020, with continued strong growth at scale into 2021.

In short, even though it could be seen as an old business, there is a large, greenfield opportunity in the drive towards electric, autonomous transportation. Hence, to be leading this disruption requires innovation.

This opportunity is arguably so large that there does not necessarily have to be a winner-takes-all. Automotive is such a large market that it could be likened to e-commerce, for example. Amazon (AMZN) has been one of the largest beneficiaries of this secular growth trend. However, there are many others who have achieved a large scale and valuation growth, including Alibaba (BABA) and MercadoLibre (MELI).

To that end, NIO is positioned to become in EVs and AVs what Alibaba is to Amazon in e-commerce: the Chinese Tesla.

NIO is a relatively young start-up, founded on the same premise of being a pure play EV automotive company, while also investing to be at forefront of ADAS and autonomous driving. It had a strong partnership with Mobileye. It was the first adopter of the former’s EyeQ4 chip in 2018. NIO was also announced to be the first adopter of Mobileye’s self-driving system, in 2022. This would likely be several years ahead of others, as Mobileye is targeting a 2025 introduction of (a broader introduction of) consumer AVs.

It is, however, not entirely sure if (and perhaps even unlikely that) this Mobileye-powered autonomous vehicle will still launch, as going forward NIO is continuing with Nvidia (NVDA) hardware and developing its own software. In any case, NIO’s timeline is unchanged, although it is not sure if NIO’s own software will be as capable as Mobileye’s. I previously covered this aspect of NIO here: NIO Stock: Autonomous Driving Too Good To Be True.

In any case, NIO will bring another first to market with its Autonomous Driving-as-a-Service model or ADaaS. This will provide customer access to its autonomous driving capabilities through a monthly subscription.

While there had been some funding issues and a slowdown in the midst of COVID-19, the image below shows that growth returned quickly. More recently, there have been issues due to the chip shortage, but those are obviously quite similar for the whole industry. 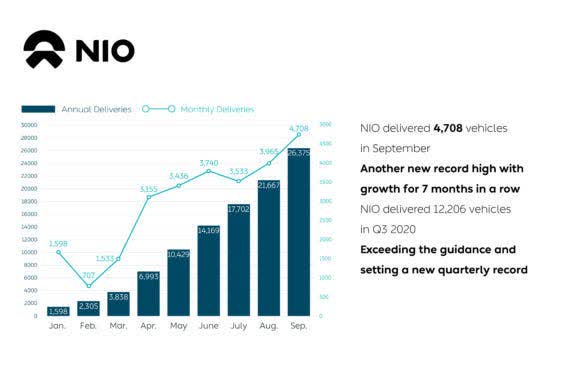 NIO’s track record of growth and innovation is further completed by its introduction of the BaaS business model and plans for international expansion to Europe in 2021.

BaaS or Battery-as-a-Service means that the EV is bought without the battery, which reduces the upfront price. The battery is then acquired separately through a subscription. BaaS was introduced in the second half of 2020 and quickly achieved a significant uptake of ~40%. BaaS also further complements NIO’s previous innovation of battery swapping.

Hence, this shows NIO is a leading innovator in the Chinese EV market, while investing to also lead the second, autonomous inflection. This is also a major market, as China is targeting a 25% EV market share by 2025. It could quickly become the silicon valley of EVs and even AVs. NIO’s international ambition further underlines its leading position.

Some have called EVs a bubble. Both Tesla and NIO stock were on the order of a 10-bagger in 2020. In the comments below many articles, Tesla’s valuation and deliveries are compared to the traditional OEMs. Supposedly this should show the large discrepancy in valuation.

Nevertheless, arguably this is not a bubble as the transition to EVs and subsequently AVs marks a major inflection. This means it is a large, largely greenfield growth opportunity. Hence, investors are willing to pay for this growth by investing in the companies who are leading. Moreover, EVs and AVs are also much closer aligned to tech investing, where higher valuations are more common.

This is, of course, in spite of automotive being notorious for its capital intensity. NIO for its part (partly) solves this by not producing its vehicles itself, but partnering for manufacturing.

There are other examples in tech where those who are seen as growth companies are rewarded with incredible valuations. For example, Nvidia has achieved almost 2x the valuation of Intel (INTC), despite over 3x lower revenue. TSMC (TSM) has over 2x the valuation of Intel despite almost 2x lower revenue. Of course, Nvidia and TSMC are growing faster than Intel, but that proves the point that high growth is often rewarded with perhaps unrealistic valuations.

With regards to NIO’s valuation, it (still) has ~10x lower market cap than Tesla (to be precise, about 8x at the time of writing), but also ~10x lower deliveries. Hence, NIO’s valuation is in line with its bigger peer.

Nevertheless, as a smaller company, it is arguably NIO who that the largest relative growth prospects ahead. For example, Tesla investors who want to see substantial shareholder returns going forward have to bank on Tesla’s goal to achieve 20M deliveries by 2030, which would be over a fifth of the total global vehicle market.

If NIO for its part would be able to translate its innovation into continued, sustained growth, similar to Tesla, then there should be no reason for NIO to not continue to track the valuation of Tesla. This means NIO, indeed, may have another 10x upside or so if it closes the gap to Tesla in scale.

From that view, NIO is lagging behind Tesla by multiple years, in both deliveries and market cap. The last comment could be as analogous to for example Pinterest (PINS), which is a company I argued was lagging by several years to Facebook (FB).

Of course, there are major risks. Mainly, this thesis is based on two assumptions:

Tesla and other EV/AV stocks will continue to grow and receive elevated valuations as these trends continue to unfold;
NIO is best positioned to most closely track Tesla’s business and stock performance.

Any decrease in (relative) valuation could result in downside. For example, Tesla’s ambition as laid out at its fall 2020 Battery Day event called for Tesla to achieve a scale of 20 million units by 2030. Hence, it is likely at least some part of that ambition for further growth is already priced into the stock.

Needless to say, not every automotive or EV company will be able to achieve a scale of 20M units, as the global automotive market is below 100M units. There is both competition from traditional OEMs such as GM (GM) and Volkswagen, as well as other Chinese companies such as XPeng (XPEV).

Additionally, although China seems to be one the largest markets for EVs in the near future, Tesla itself has already built its own Gigafactory in China, further increasing competition. Although the reverse is also partly true given NIO’s own international expansion.

The last risk for NIO growth it that is has expressed that it wants to remain a premium brand with relatively high ASPs (average selling prices). While this implies NIO could have above-average gross margins, it may nevertheless lower NIO’s addressable market and hence potential future growth.

Further, while NIO is heavily investing in autonomous driving and seems to be at the forefront of this next major inflection, it is ultimately reliant on third-party silicon vendors like Nvidia. This insight means pretty much by definition that AV technology may not remain a differentiated capability, as others will be able to buy the same off-the-shelf systems. Although as noted NIO is developing its own software, that itself is also a risk given the difficulty in creating a scalable and reliable AV system.

As described, though, NIO is a clear, leading innovator, and has achieved a strong brand value. This arguably makes it the strongest candidate to become the closest to a ‘Chinese Tesla’.

In the last 18 months or so, there has been a major shift in investment sentiment around EV companies. Tesla has seen 10-bagger returns. So when evaluating NIO, after its own 10-bagger returns (or more), to a valuation closer to $100B than $10B, on the surface this may change the investment narrative.

However, at least a portion of NIO’s large shareholder returns was because of its financial issues, which it has overcome; NIO’s valuation is not significantly different from Tesla, for one. Meanwhile, its still much lower scale arguably leaves much room for upside.

NIO’s stock is based on NIO’s growth to capitalize on the two-fold disruption of EVs and AVs in the automotive industry. NIO already has a proven track record of growth and innovation with battery swap, ADAS, autonomous driving (although with some increased risks given its change of supplier), ADaaS, BaaS, and even international expansion.

While far from every company will be able to achieve a similar scale as Tesla, NIO clearly remains positioned to be successful in this space, which represents a large, greenfield opportunity in both the Chinese and international push towards electric and autonomous driving.

This means NIO’s valuation is both the risk and the reward. The reward is that NIO could realistically still expand by another 10x if it continues to trade at a similar valuation as Tesla, while closing the gap in scale. I likened NIO to the Alibaba of EVs: the Chinese counterpart of Amazon in EVs. The risk is NIO’s ability to execute and deliver on its growth opportunity, as well as (just as importantly) as Tesla’s and other EV stocks’ valuation not collapsing on changes in investor sentiment.

The bottom line (since NIO’s peak in February) is that the potential opportunity that still lies ahead slightly outweighs the risk.