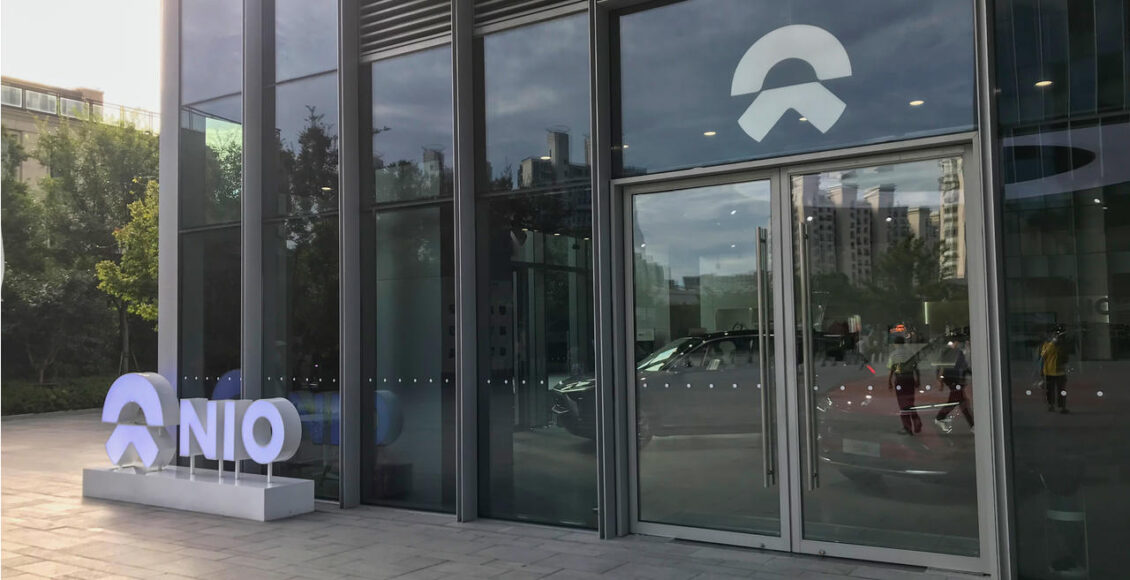 NIO (NIO) shares have tumbled through July, falling 16% from over $53 per share as the company rose at the end of June with infrastructural tailwinds, European optimism, analyst upgrades, and strong expected deliveries. NIO’s June numbers showed an acceleration of deliveries to a +20.4% m/m growth rate, yet July’s numbers reversed that trend and were quite underwhelming, although NIO still managed to rise following stronger deliveries from peers Li Auto and XPeng. 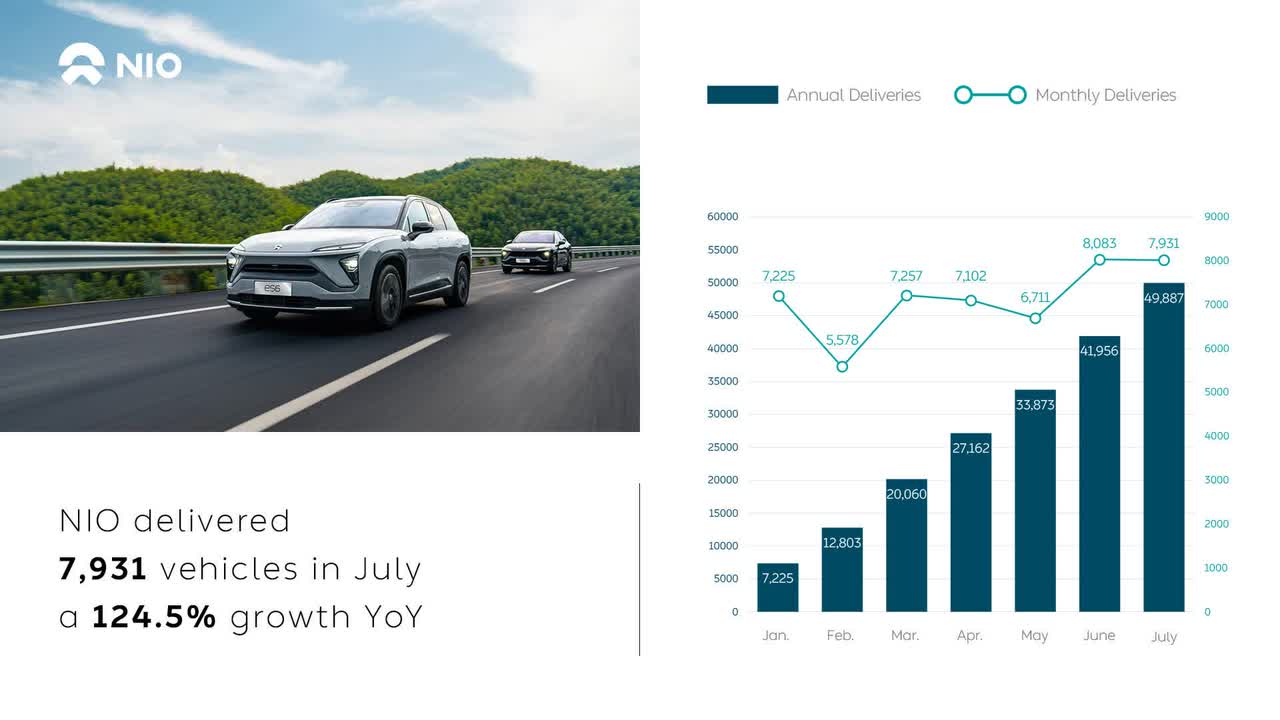 NIO’s July deliveries came in at 7,931 vehicles, a 125% increase y/y but a 2% dip m/m, with the ES6 leading the way. It’s another month of bumpy deliveries, as NIO has only shown two months with sequential gains so far – March and June. July’s deliveries are just 8.7% higher than Q2’s 7,299/month average.

Chip shortage fears were eased in June on the back of a very strong sequential increase after a period of weakness from March to May, but July’s figures show that NIO’s premium market placement could be facing some issues as demand looks higher in lower price segments.

NIO was actually beaten out by its peers this month – Li Auto posted a record month for its deliveries, reaching 8,589 units of the Li ONE. Li’s all-time high monthly deliveries showed that the semiconductor shortage fears surrounding its poor performance earlier in the year have eased; July’s figures represented an 11.4% m/m increase, and were nearly 57% higher than Q2’s 5,858/month average. XPeng reported deliveries at 8,040 vehicles, up 228% y/y and 22% m/m, beating out both Li and NIO on that growth rate. Even the Hongguang Mini (GM) closed in on 30,000 units in June, as July figures haven’t been announced, and in one year, the mini EV has more than doubled NIO’s lifetime delivery tally.

While NIO’s sales stagnated in July, peers performed very well, setting up a worrisome trend for the manufacturer should it continue to lag XPeng and Li in terms of deliveries. Back in June, NIO had delivered over 1,500 more vehicles than XPeng, and in just one month, XPeng clawed back that deficit and delivered 109 more vehicles than NIO. It goes to show that NIO is not alone in its growth, and faces an increasingly challenging competitive environment which will not reward underwhelming performance in the long run.

NIO is still advancing with its European expansion plans and the upcoming ET7, but it faces competition from XPeng in Norway and potentially other European countries in the future, should the two continue expansion across the continent. XPeng also has upcoming models in development, and Li is working on a pure BEV coming in 2022. Competition between these three is fierce, not to mention from the likes of BYD, Geely, Great Wall, Tesla, and more.

China’s crackdown on DiDi shortly after its IPO, combined with other threats and fears against large corporations like Alibaba raises fears that the government could intervene in the EV industry, as data collection is growing.

EV vehicles, in general, are becoming more technologically advanced and connected, and such connected vehicles can generate dozens of gigabytes of data per hour. NIO defines its EVs as ‘smart’, with NOMI serving as an AI in-vehicle assistant, as well as advanced infotainment and a connected cockpit; as such, its vehicles create vast amounts of data each time they are driven. Another of NIO’s pillars is its community – the hundreds of thousands of users who have purchased and drive a NIO vehicle and those who have downloaded NIO’s app.

NIO’s user ecosystem extends to NIO Cloud, which processes all of this data and provides a “joyful and hassle-free User-Experience beyond expectations.” NIO’s app and products generate, store and process billions of pieces of user data, so there is a risk that China will step in and intervene as it has done so with other companies regarding data storage and security.

NIO’s July developments and surrounding issues weren’t all negative, as the company unveiled some interesting plans at Power Day early in the month.

Power Day mainly covered the topics of expanding charging infrastructure, and goes hand-in-hand with NIO’s Power North plan, where it aims to build and “deploy a total of 100 Power Swap stations, 120 Power Mobiles, 500 Power Charger stations with over 2,000 Power Chargers, and over 10,000 destination chargers in eight provinces and autonomous regions” by 2024. Power Day saw the announcement of a plan to build “4,000 battery swapping stations globally” by 2025, with 700 of those finished this year.

Analysts are praising Power Day, namely NIO’s “ability to ‘seamlessly integrate multiple methods of energy replenishment’ into its ecosystem” and provide unique charging methods like battery swapping and Power Mobile, as well as an announcement that other EV companies could have access to “its public charging infrastructures and BaaS/fast battery swap technology.” If NIO ends up licensing battery swapping to other manufacturers and monetizing that service, it could see a solid boost to revenues. Expansion of battery swapping stations and large purchase price discounts incentivizes new buyers to subscribe to the service, creating recurring monthly revenue streams for NIO as it continues to grow.

NIO has garnered itself a premium valuation relative to Li and XPeng as it has led the three in terms of deliveries for its lifetime. However, its fluctuations within its deliveries and placement now behind the other two could lead it to underperform in the future, as it battles both that higher valuation and possibly lower monthly deliveries. NIO has failed to outperform both XPeng and Li over a 6-month period, but more so since June; it could have some difficulties delivering higher returns if it can’t deliver higher amounts of cars. 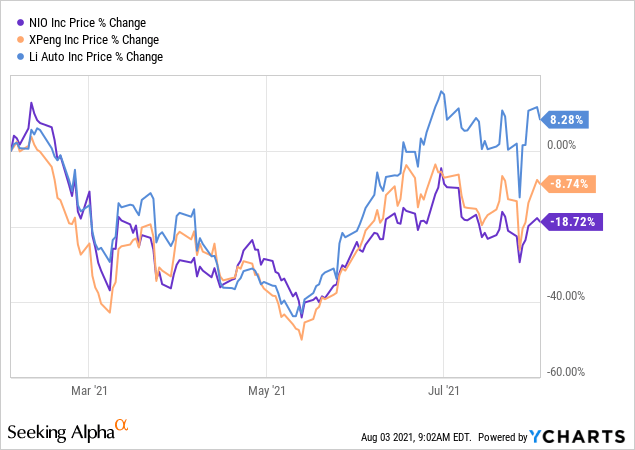 Revenue growth at this degree comes with EV adoption reaching an inflection point, especially in main market China. As the nation pushes for more and more EVs on the road and more infrastructure supporting it, NIO stands to benefit through increasing deliveries and more models as well as its planned expansion of battery swap stations to the thousands and eligibility for subsidies regardless of vehicle price.

At the moment, NIO trades at about 12x EV/sales, while XPeng and Tesla trade between 12-13x, and Li at 8.0x. NIO is valued appropriately with peers, but it’s starting to show a bit of weakness in its deliveries. While that trend could be reversed with its Norwegian and ET7 launch, NIO still faces challenges to grow from holding a premium valuation that it could find harder to grow into if multiple expansion in the industry fails to occur.

NIO trades at 7.4x for FY22 and 5.2x for FY23; XPeng, at 6.8x and 4.4x, and Li at 4.6x and 3.0x. Tesla does trade higher than NIO, but Tesla has long established itself as a global leader with annual deliveries at a much larger scale, justifying that premium. But against Chinese peers, NIO’s premium valuation for the next few fiscal years hangs on its ability to regain the top spot in deliveries each month, and successfully enter new markets.

On a longer time frame, if EV vehicles are expected to be the next ‘gold standard’ and replace ICE, the old standard, maintaining high valuations could become difficult. Leading ICE manufacturers including Ford (F) and GM, who are making big pushes into EV, trade around 1.3x EV/sales; right now, EV manufacturers are being valued for technological advancements, fast growth, and disruption. But as the industry matures, and EV becomes the predominant vehicle type, disappearance of those rapid growth and disruptive factors and increased competition (from every manufacturer involved in the space) does not look to support high single-digit or double-digit multiples – there’s nothing preventing these leaders to eventually trade at a valuation of 2.0x 2030 sales.

NIO sits in an interesting position, commanding an almost $75 billion valuation, higher than both XPeng and Li combined, as it now faces tougher monthly competition from the two. NIO’s July deliveries dipped slightly from June, while Li and XPeng jumped to new records, both beating NIO’s tally. It’s the first month where those two have managed to beat NIO, and it shows that competition in the industry is only increasing.

NIO needs a strong August to bounce back from a weaker July deliveries report, and set Q3 up for a positive start heading into seasonally strong sales. The manufacturer still can reach 87,500-90,000 deliveries this year, but it will need a strong August to start to cement that in stone. August numbers from XPeng and Li will also be of interest to NIO, as it will show if it was just a one-month fluke, or if the two will extend their monthly leads against NIO.

NIO could also face some ramifications from the Chinese government’s crackdown on tech companies, mainly in regards to data, but as of right now, it’s more of a speculative risk than an actual threat. Yet there’s no certainty of if/when the government could make a move, and NIO’s community and data created by its smarter vehicles could come into focus. Aside from that, NIO still has some positive synergies, mainly stemming from Power Day and expansion of battery swapping networks.

However, given the weaker delivery report relative to peers, and after a strong June where chip shortage fears easing were pushing expectations up for a stronger report in July, NIO’s shares remain on watch with a reiteration of a neutral rating.