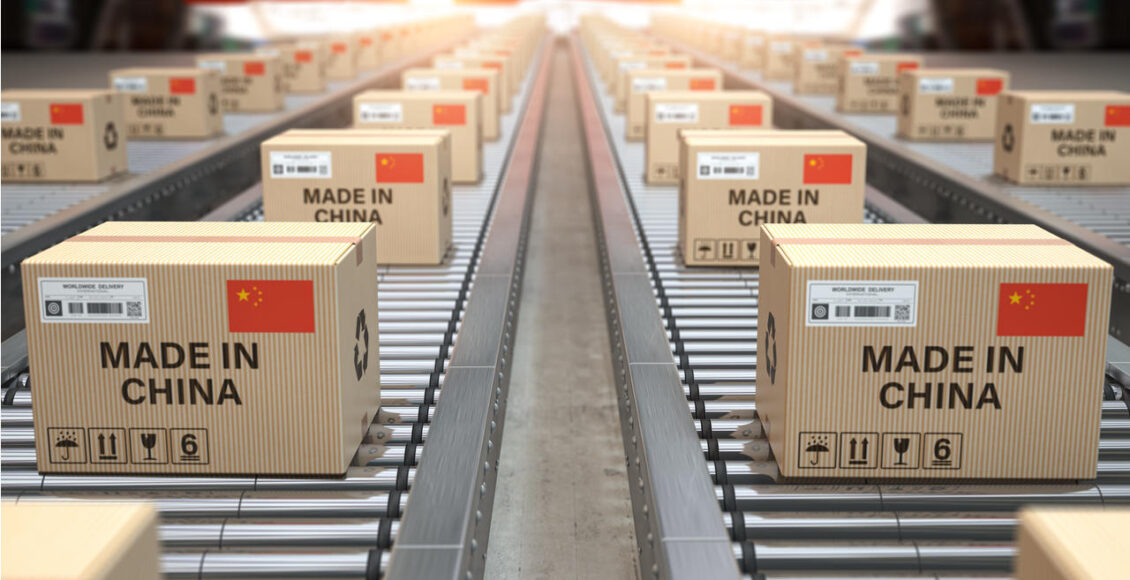 Li Auto expects to deliver three new vehicles in 2022-2023, and is expanding to broader regions across China. With these developments, in my opinion, LI will most likely reach sales of CNY114 billion in 2025 and 2025 FCF of CNY102 billion. In my view, the company is currently undervalued as many investors have failed to understand Li Auto’s future free cash flow. Under my base case scenario and worst-case scenario, the company is worth $44-$100 per share, which is a higher mark than the current market price of $25-$28. I used a discount of 7%-10%, my own FCF assumptions, and FCF/Sales of 9%-10%, which are close to the figures delivered by Tesla and NIO.

Based in China, Li Auto is a new energy passenger vehicle with a market share of more than 9% of the NEV market.

In my view, in the next ten years, the company will deliver sales growth for two reasons. First, the electric vehicle market is growing in China more than anywhere else. Li Auto will most likely grow because its target market will grow. Experts from the China Association of Automobile Manufacturer are expecting that the NEV total revenue will grow at more than 40% y/y from 2021 to 2025. With this in mind, I believe that Li’s sales growth shouldn’t be much lower than 40% y/y in the coming future:

China’s new energy vehicle sales are expected to grow more than 40% each year in the next five years, a senior official at the China Association of Automobile Manufacturers (CAAM) said on Friday. Source: Reuters

Now, we also need to take into account that Li Auto is developing new cars. It means that we can expect Li Auto to gain market share in the EV market. According to the most recent prospectus, the company expects to deliver three new vehicles in 2022-2023. Li commenced to deliver cars in 2021, and obtained a significant market share. I would expect that the company will obtain more market share when new models tap new segments of the NEV market. In sum, I believe that LI’s sales growth could be larger than that of the market.

There is something else. Since the company launched its first model in 2021, the company invested a lot of money in R&D. As a result, Li made significant progress in its proprietary smart vehicle solutions. From 2022, the new cars will include Level 4 autonomous driving as a standard configuration. With the new technologies, I expect that drivers will be more interested in LI’s vehicles, which could mean additional sales growth and market share: 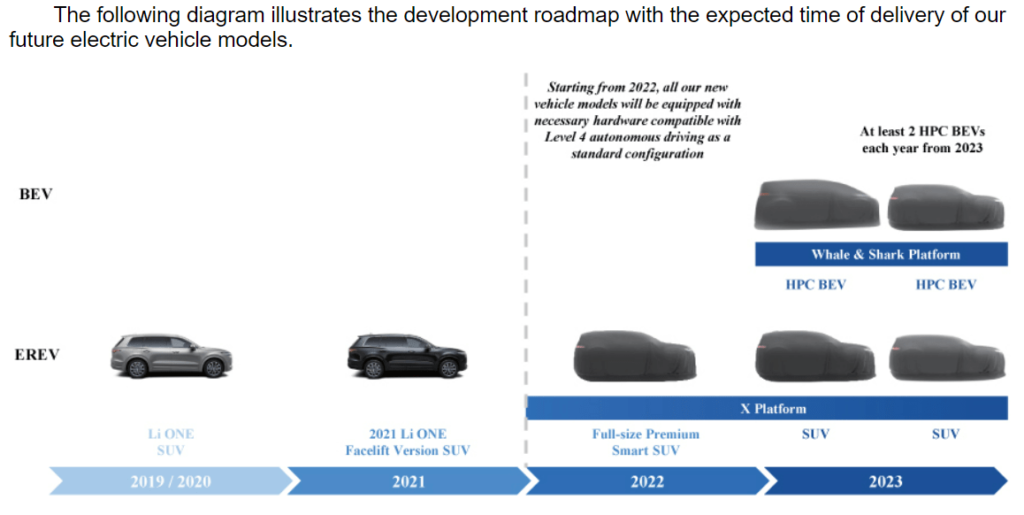 The company has tons of cash to enhance R&D and pay marketing efforts that will most likely enhance sales growth. As of March 31, 2021, the company reported more than $4.6 billion in cash, equivalents, and short-term investments. The company’s asset/liability ratio is also equal to 4.7x, which means that the company’s balance sheet appears very healthy: 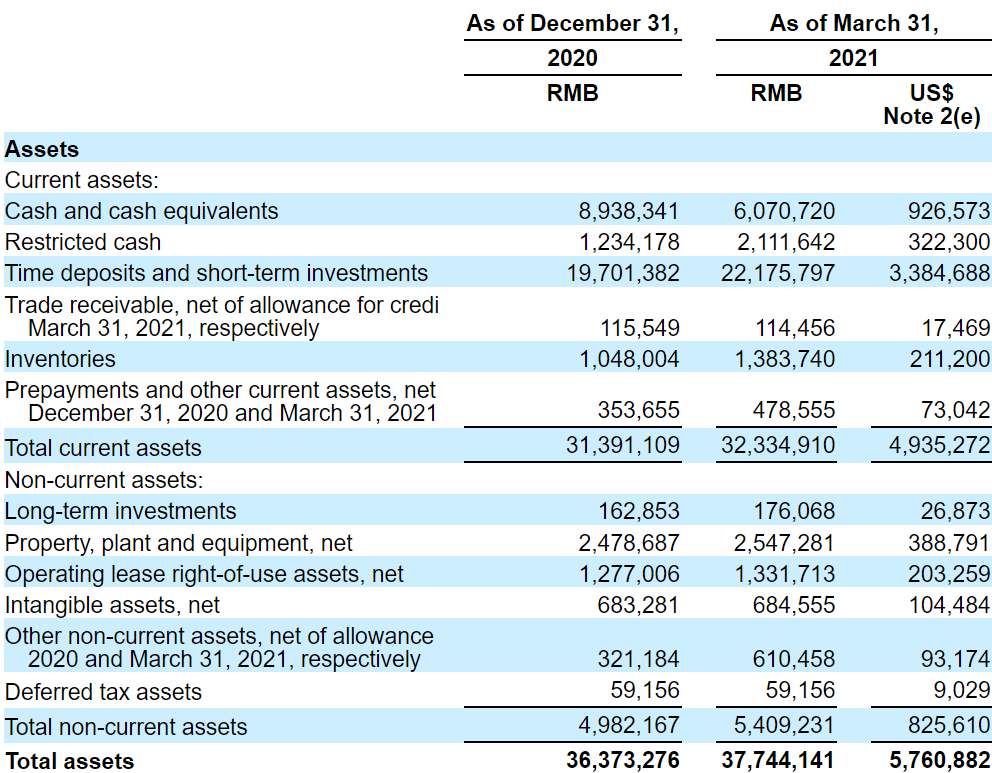 Investors will most likely not worry about the company’s financial obligations. Notice that Li Auto reports long-term borrowings of $79 million. Clearly, the management received a significant amount of cash from shareholders who believe in the project. LI didn’t have to talk to banks to finance its operations: 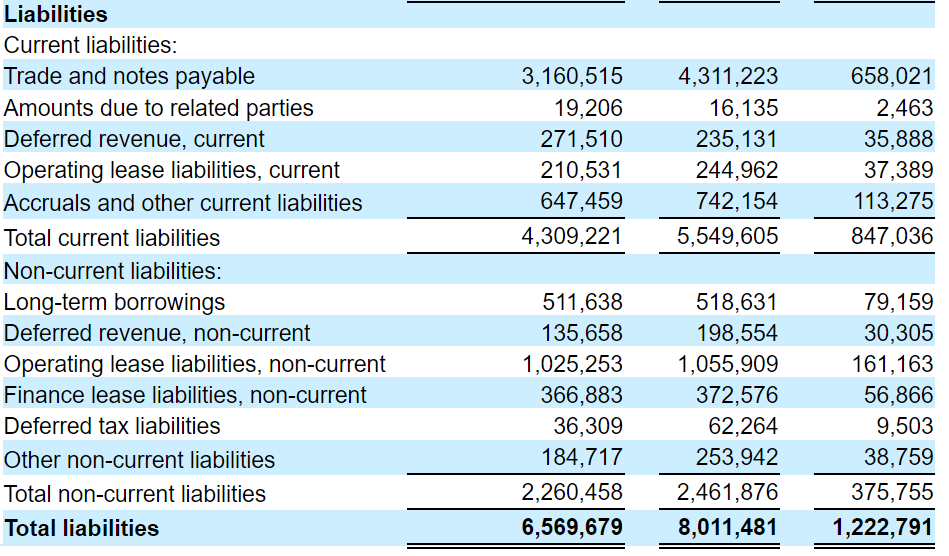 If Li Auto successfully launches three new vehicles as planned for 2022 and 2023, I believe that the company will most likely grow as NIO and Tesla did. From 2012 to 2020, Tesla and NIO reported sales growth of more than 50% when the distribution of new cars commenced. Then, as the production of new cars continued, sales growth declined from 200% to less than 30%-50% y/y. Notice that Li Auto is targeting the EV market in China, which is larger than that in the United States. Thus, in my base case scenario, with a large target market, Li Auto would most likely obtain as much sales growth as Tesla delivered: 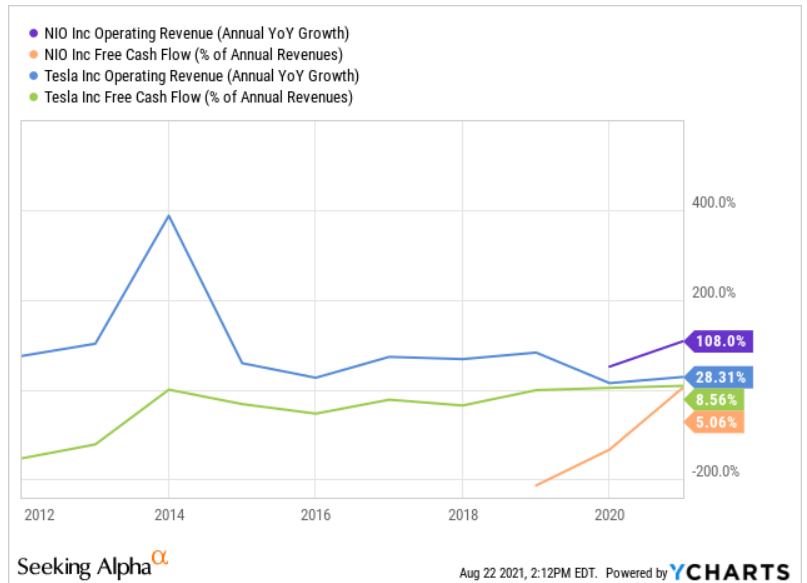 Most investors are using a discount of 7% for the stock. So, in my base case scenario, I used the same discount. With that, I would expect volatility to increase the company’s beta in the coming future. So, I used a discount of 10% in other case scenarios. 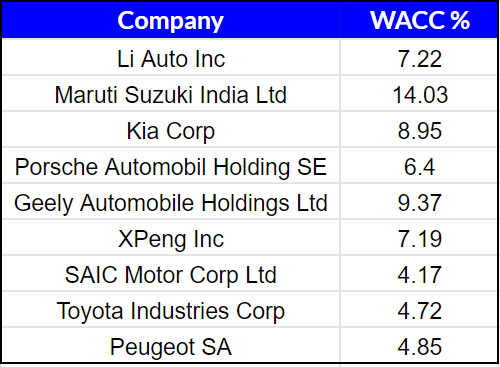 With Li Auto’s WACC standing at 7%, the company’s FCF at CNY41 billion, and an exit multiple of 25x FCF, the implied share price is equal to $100:

China does not currently have the adequate private and public fast-charging infrastructure. That’s not all. In my opinion, China has limited residential parking space in cities, high population density, and power grid capacity limits. As a result, the government may have difficulties in the development of private charging infrastructure. Li Auto reported the status of the infrastructure in its most recent prospectus:

As of December 31, 2020, fewer than 25% of families in first-tier cities in China had parking space suitable for installing home charging stalls, compared with over 70% of families in the United States, according to the CIC Report. As a result, a substantial number of BEV owners in China have to rely on public charging infrastructure. As of December 31, 2020, the ratio of NEV parc to public fast-charging stalls was 15.9 to 1, according to the CIC Report. This demonstrates the insufficient number of public fast-charging stalls in China to support the growth of BEVs. Source: Prospectus

With the limitations of public charging infrastructure, I believe that Li Auto may not report the sales growth of Tesla. Notice that if China does not develop its infrastructure, Li Auto may target a lower than expected electric vehicle market. Under my worst-case scenario, the company would deliver sales growth of 20% in 2026 and 10% from 2026 to 2031. The FCF/Sales would stay at 10%-8%, and the terminal FCF is equal to CNY18 billion:

In this case scenario, I used a discount of 10%, which I believe is quite conservative. The exit multiple is also equal to 25x FCF, which I believe is acceptable for a company that delivers FCF/Sales of 8% and double-digit sales growth. Putting everything together and assuming a share count of 1 billion, the implied share price is equal to $44:

My target price in the worst-case scenario is close to that of other analysts. The current consensus obtained from 15 analysts includes an average target price of $43 with the lowest level being at $30 and the highest mark being at $62. I believe that most market analysts expect the infrastructure in China to develop at a low rate. In any case, most of us believe that the company is a buy at its current valuation of $24-$28: 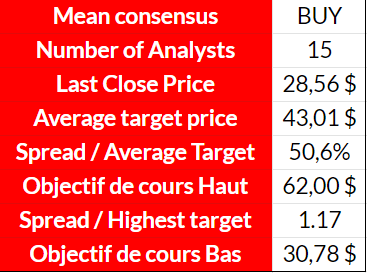 Li Auto will also be affected by any disruptions to semiconductor manufacturers. The company specified clearly in its recent prospectus that the ongoing global chip shortage that affects the automotive industry could damage LI’s future production. LI’s product includes a significant number of components. The shortage of any other necessary equipment would also damage the company’s revenue lines and future free cash flow.

Li Auto is also subject to PRC Cybersecurity Law and data protection regulations. Hence, the company invests a significant amount of money for preventing unauthorized access, security breaches, or any other damage that hackers could create. With that, new discoveries in the field of cryptography, or an increase in the level of expertise of hackers could occur. In this regard, if the company has any issue, LI’s brand may be damaged, or the company may have to pay significant fines. As a result, the valuation of the company could decline.

If Li Auto successfully sells three new vehicles in 2022-2023, and the infrastructure in China is sufficiently developed, I expect sales of CNY114 billion in 2025 and 2025 FCF of CNY102 billion. I assumed that LI will have sales growth similar to that of Tesla and NIO. A projection of the company’s FCF for ten years and a discount rate of 7%-10% implied a fair price of $44-$100. With these figures in mind and the current valuation of $24-$28, in my opinion, there is a significant upside potential in the stock price. Once the company reaches its sales targets in 2023-2025, I believe that investors will trust the company, and the share price will creep up.