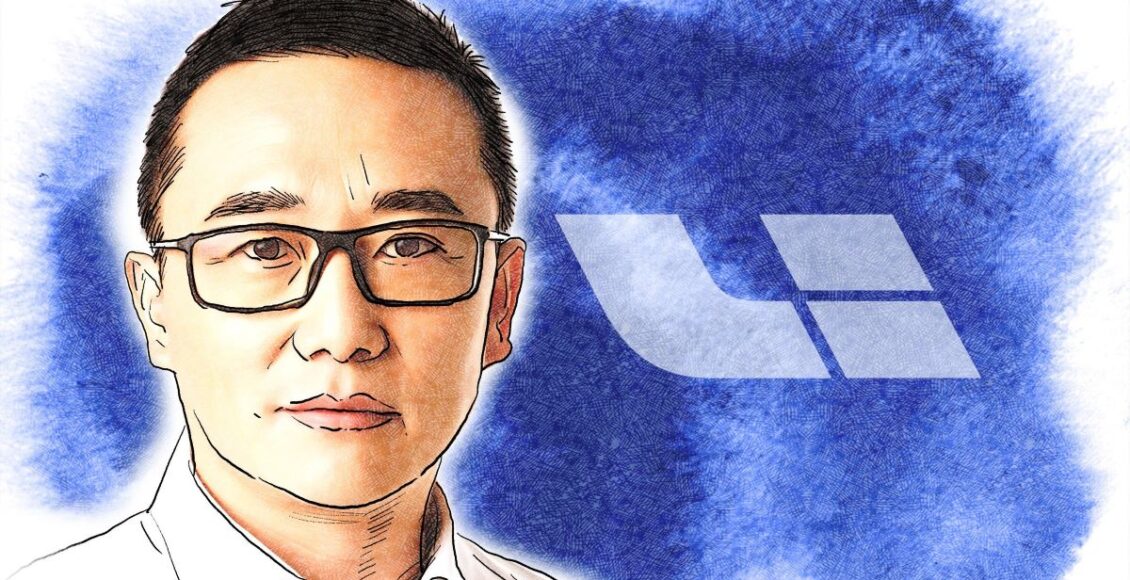 Li Auto, one of three New York-listed Chinese electric vehicle (EV) makers chasing Tesla’s market lead, said it is mulling the possibility of an offshore production base – perhaps in Europe – to be its stepping stone for the global market, as it maps out a strategy to outgrow China’s bare-knuckle EV market.

“We want to be a winner, not just a mere participant, in the global market,” Li Auto’s president and co-founder Shen Yanan said in an interview before the six-year-old EV maker’s HK$11.8 billion (US$1.52 billion) initial public offering (IPO) in Hong Kong.

“To win market share overseas, a car company has to develop the right product to attract customers with tastes” and requirements that differ from mainland Chinese users, he said. “We have set up a team dedicated to the overseas markets and we are meticulously working on the plans to find a winning formula.”

Li Auto’s shares began trading unchanged in Hong Kong from their HK$118 offer price. The company’s American depositary receipts rose 1.1 per cent to US$30.72 overnight in New York. The company does not rule out the possibility of raising capital in mainland China’s yuan-denominated A-shares market, Shen said in Hong Kong after Li Auto’s trading debut.

The plan comes as an estimated 500 EV makers at various stages of planning and production are vying for sales in the world’s largest vehicle market, where three in every five new vehicles on China’s roads are expected to be powered by electricity by 2030, according to a UBS forecast. Deliveries of so-called new energy vehicles jumped 12 per cent to 1.17 million units in 2020, nearly half of the global total.

Li Auto’s Hong Kong IPO adds to the US$1.1 billion war chest it assembled from its New York IPO in July 2020, giving it the financial resources to develop new models and expand production capacity. 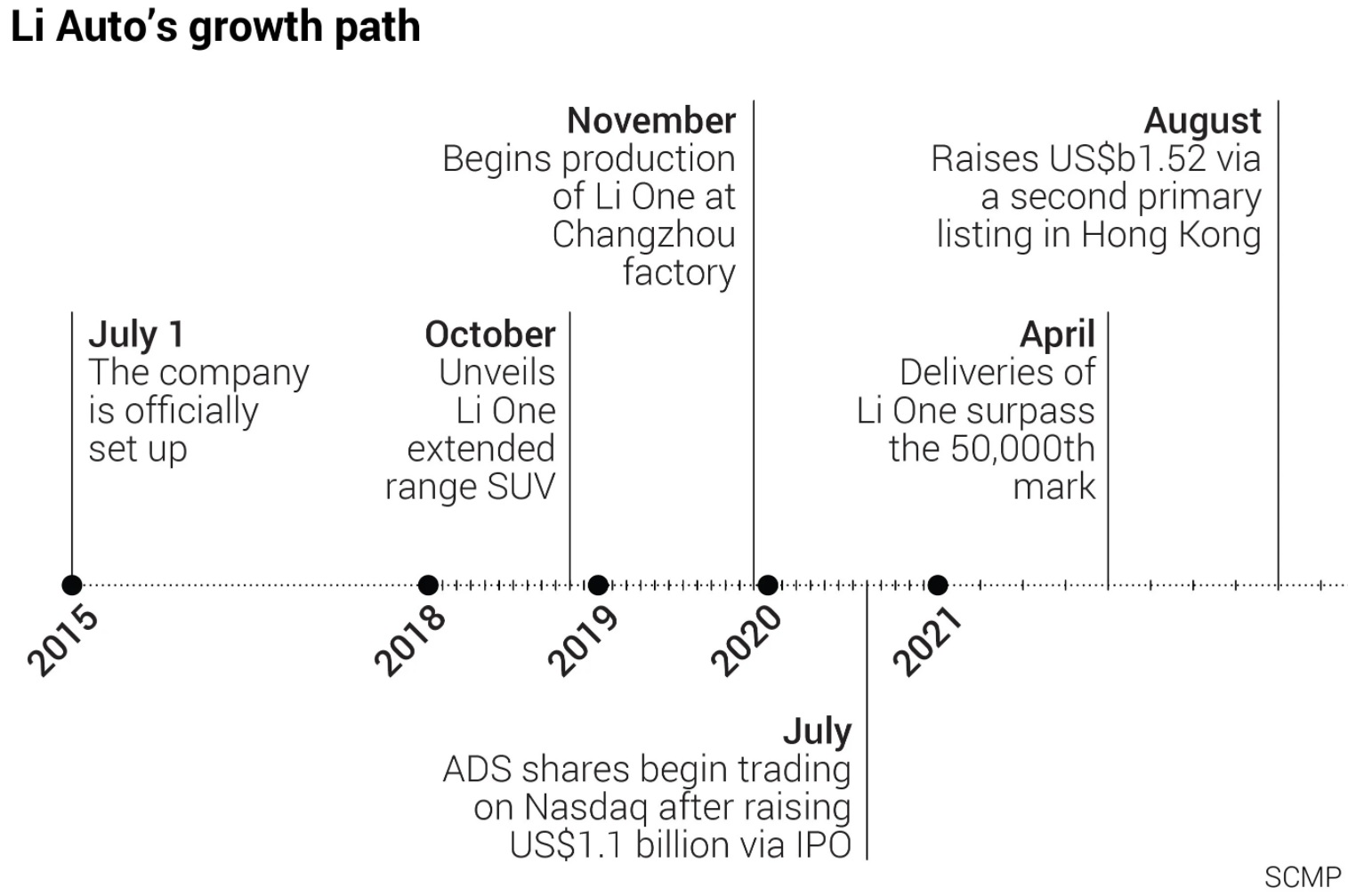 Backed by China’s food delivery giant Meituan with a 16.2 per cent stake, Li Auto delivered 38,743 EVs in the first seven months of 2021, neck and neck with rival Xpeng Motors, behind NIO’s 49,900 units and lagging the 205,100 cars sold by BYD, according to the companies.

Xpeng and NIO have both started shipping China-made EVs to Norway, using the Nordic region as the foothold for their exports. Still, the Nordics’ combined population of 27 million people makes for a relatively small exports market, which behoves Li Auto to look for a local assembly to sell to the entire continent, said Shen, who also goes by Kevin. 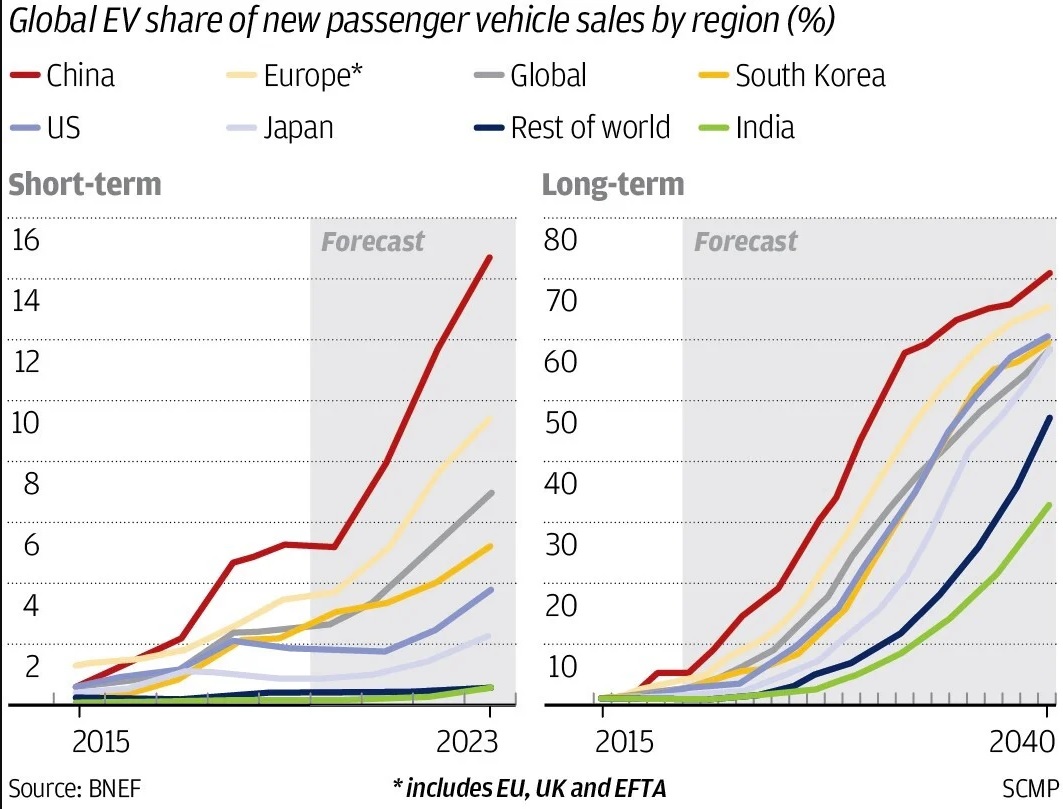 “Europe’s EV market has been growing fast and all EV companies should watch it closely,” said David Zhang, a researcher of automotive industries at the North China University of Technology. “Only companies with strong presence in all the major EV markets worldwide can be labelled as a true international powerhouse.”

Shen, 44, is responsible for overall strategy, business development, sales and marketing as well as the management of supply chains at Li Auto. Shen, who studied logistics at the University of Edinburgh and obtained an executive MBA (EMBA) degree at Shanghai’s leading business school, worked at the Chinese computer giant Lenovo before joining Li Xiang in his EV start-up in 2015.

“The automotive industry is the second-largest industrial sector in China, after the real estate and construction industry,” Shen said. “It has unlimited potential, where it is undergoing a revolution that can give new technology the stage to define the future of mobility.”

Li, who turns 41 in October, is a bit of an idealist: a firm believer in using renewable energy to solve the world’s environmental problems.

Beijing, where Li Auto’s head office is located, had some of China’s most bad-air days in 2013 before Li started his EV company, as a combination of open-air coal burning, inclement weather, dust storms and vehicle emissions frequently clouded the Chinese capital’s air quality.

Over an hour-long meeting at a Starbucks outlet in Beijing, Li and Shen hatched out their idea for starting an EV maker, according to a post on the website of the China Europe International Business School (CEIBS), where Shen did his EMBA course.

The duo named their start-up Li Xiang in Chinese, which means “ideal”, a homonym of Li’s name. Li declined to be interviewed.

“Li Xiang is a rare breed, a top-notch product manager who possesses the boldness to be different, with a relentless dedication to creating value for end users,” said Huang Mingming, founder and chief executive of Future Capital, the first investor to back Li Auto in 2015. “He has a deep understanding of the preferences and pain points of car owners and drivers in China.” 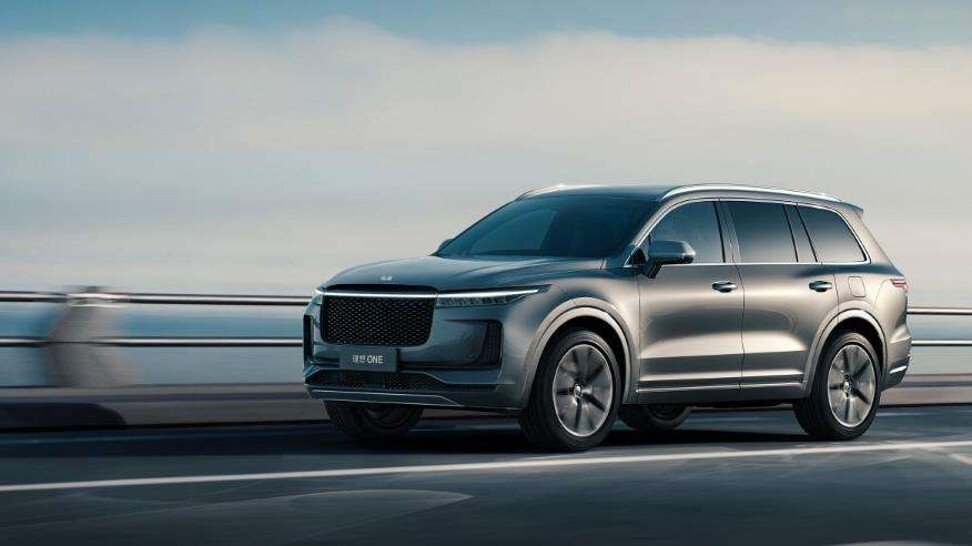 Li, described as the person responsible for setting the company’s direction and product development, laid down a two-stage plan for his start-up: start by selling a small EV for convenient commuting, before expanding into an all-electric sports-utility vehicle (SUV) that could meet the needs of an entire family. Plans for the small EV flopped because its specifications failed to keep up with China’s changing regulations, making it unfit for mass usage.

Li Auto’s first model, named Li One, rolled off the company’s assembly in 2019 in Changzhou, a city of fewer than 5 million residents located on the southern banks of the Yangtze River in Jiangsu province. Li One, carrying a sticker price of 338,000 yuan (US$52,150), delivered 33,457 units last year, rising to 63,000 vehicles by the end of June. Shen expects the carmaker to break the 10,000-vehicle monthly barrier – the definition of a blockbuster in China – before September.

“Some great tech start-ups can intuit what consumers want and offer them the right products,” said Phate Zhang, founder of the EV tech news portal CNEVPost. “Li One’s success heightened hopes of Chinese drivers for a new smart vehicle that can define the future of mobility.”

A full-size SUV is on its way, scheduled some time in 2022 based on its new X platform that can produce next-generation extended range EVs with a new power train, with plans to launch at least two premium EVs every year starting from 2023, Li Auto said in its listing prospectus.

Every new model starting from 2022 will be capable of level 4 (L4) autonomous driving, defined as the vehicle’s ability to handle itself in most driving circumstances without human intervention. Xpeng, NIO and Tesla all have L4-capable vehicles on the roads, and Xpeng even conducted a 3,675km autonomous driving test from Guangzhou to Beijing in March.

“We are still at a rudimentary stage in the process of building an EV powerhouse,” Shen said. “Between 2025 and 2035, a fierce battle for supremacy in the EV industry will eventually decide who the winners are.”

Li Auto’s single-model business did not stand in the way of its capitalisation. The company is valued at US$31.5 billion, almost the same as SAIC Motor, China’s largest state-owned carmaker and the Chinese partner of Volkswagen and General Motors. The EV maker’s stock, trading with the mnemonic LI, rose in New York before its Hong Kong IPO.

Li Auto was the first carmaker in China to successfully commercialise extended-range electric vehicles (E-REVs) for what Huang described as an effective way of solving the challenges of inadequate charging infrastructure and battery technology constraints. In addition to charging for electricity, an E-REV is also fitted with a small internal combustion engine to generate additional electric power when cars clog the roads.

Li Auto’s first-quarter loss widened almost fourfold to 360 million yuan, following a net loss of 151.7 million yuan last year. The carmaker may not be able to generate sufficient revenue and would probably continue to incur substantial losses due to a lack of demand for its vehicles and increasing competition, Li Auto said in its prospectus.

Li Auto, NIO and Xpeng are all gunning to challenge Tesla as they design and assemble intelligent vehicles powered by batteries, fitting them with autonomous driving capabilities, voice-activated controls and sophisticated in-car entertainment systems.

An ideal intelligent vehicle will be able to interact with drivers and passengers to meet their demands for entertainment, work and even shopping when driving, Shen said.

“Human-to-machine interaction in cars will be unlimited in the future of mobility,” Shen said. “Li Auto aims to develop more technologies to serve commuters. Our goal is to be a top global EV maker worldwide when a new transport system becomes a reality.”