The end of a lock-up period after a new listing is often a triumphant time when pre-IPO investors can cash out and book profits. For Didi Global Inc., whose shares have lost more than half of their value since going public, it’s a different story.

Regulatory crackdowns on both sides of the globe, culminating with the announcement of Didi’s plans to de-list in New York, have weighed on the Chinese-ride hailing giant. It’s lost $40 billion in market value since the June IPO – a stunning blow for what was expected to be one of the largest and most successful deals in 2021.

Certain company directors and executives that hold shares as well as firms that invested in Didi ahead of the listing have been spectators to the stock’s collapse, restricted from selling for a customary 180-day period after its public sale. Come Monday when that lock-up ends, they have a decision to make: sell now – potentially for a loss – or wait months for more clarity on Didi’s plans to list in Hong Kong.

“Once Didi lists in Hong Kong, the dark cloud of uncertainty will largely dissipate, which would be positive for the shares,” Jason Hsu, founder and chief investment officer of Rayliant Global Advisors said. 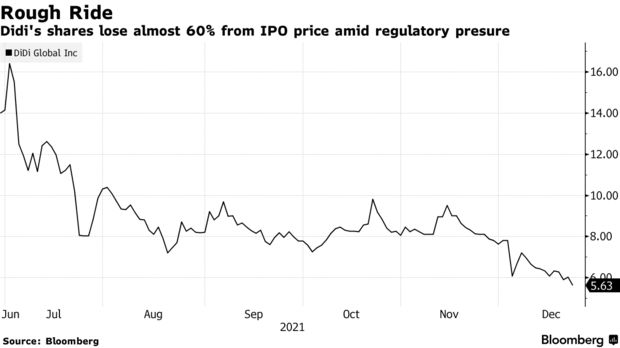 Uber Technologies Inc., which owned 11.9% of the company right after the IPO in June, isn’t planning to sell immediately upon the expiration of the lock-up, according to a company spokesperson. Chances are other early investors also stay on the sidelines, according to analysts.

“Optically, it would be quite a bad look if insiders started reducing holdings materially with the plan for a delisting in the US and offering in HK in the new year so I wouldn’t expect too many to be selling just yet,” according to Matthew Kanterman, an analyst at Bloomberg Intelligence. “Insiders selling a significant number of shares given all of these uncertainties and risks would be a very bad message to the market.”

The lockup applies to company directors, executive officers and holders that own at least 90% of total share capital. SoftBank Group Corp. and Tencent Holdings Ltd. were listed as holders as of June, while Didi’s directors and executives collectively held about a 10% stake in the company, according to the IPO prospectus.

Didi this month began preparations to withdraw from U.S. stock exchanges following demands from Chinese regulators that had opposed its American listing over concerns about the security of sensitive data. It will pursue a listing in Hong Kong and ensure that the U.S. stock will be convertible into freely tradable shares on another internationally recognized stock exchange.

Meanwhile, the Securities and Exchange Commission is crafting a new law that mandates foreign companies open their books to U.S. scrutiny or risk being kicked off New York Stock Exchange and Nasdaq within three years.

Didi’s migration to Hong Kong may provide investors with an alternative, albeit a protracted one. Bloomberg News reported earlier this month the company had begun setting the groundwork to withdraw from U.S. and was aiming to file the paperwork to start trading in Hong Kong around March. Based on the typical process there, it could target a summer listing.