China’s new-energy vehicle (NEV) industry set records in 2021. The country produced 3.54 million NEVs, including battery-electric cars and plug-in hybrids, and sold 3.52 million of them. Sales were up 181% from 2020 and exceeded the total of the previous three years. In 2021, NEVs made up 15.7% of the country’s car market.

The numbers boosted market enthusiasm. Experts predict that NEV sales in China will jump to 5 million to 6 million cars this year, taking 25%-30% of the domestic auto market. China will be by far the world’s largest producer and buyer of NEVs.

A market penetration rate of more than 20% will mark a major turning point, meaning that early education of the market is basically complete and the supply chain is beginning to stabilize, according to a report by Sinolink Securities.

Take the smartphone industry as a reference: When the penetration rate of smartphones reached 22% in 2010, the consumer market entered a reshuffling phase. The same is expected for the NEV market in China, where smaller players are expected to be squeezed out and big players to dominate, industry participants said.

Even though analysts are bullish on the industry, NEV stocks declined nearly 12% in the first month of 2022. The drop is in line with the weak start of the overall stock market, but also reflects the market’s divergence on NEV stocks’ valuations and profit-taking pressure after a record surge in December.

In the short term, there are worries in the NEV industry. Rising costs, shortages of chips and batteries, withdrawal of government subsidies and the “dual credit policy” are increasing pressure on traditional auto manufacturers and intensifying competition. The dual credit policy, implemented in 2018, penalizes automakers whose vehicles fail to meet fuel consumption targets and allows them to offset excessive consumption with new-energy credits that they generate or buy from other companies.

But looking ahead three to five years, the industry is still in the stage of rapid demand expansion and is still a high-growth sector with investment value, several institutional investors told Caixin. 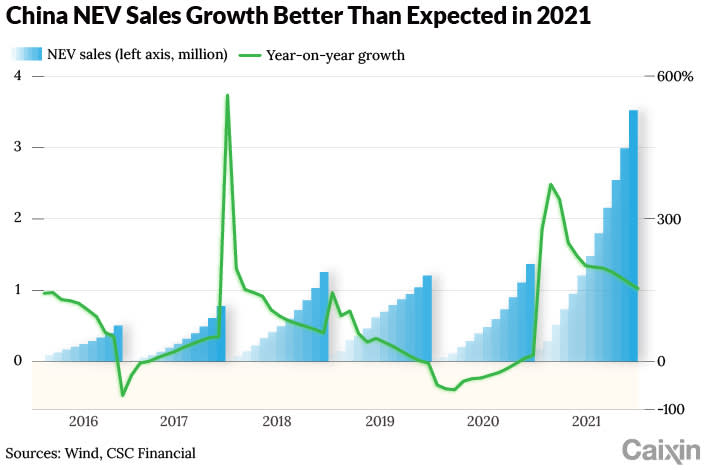 For years, China’s biggest cities, such as Beijing, Shanghai and Guangzhou, have limited the number of license plates available to gasoline cars to control congestion and pollution. Since 2019, license plates for NEVs have been handed out with no restrictions. For many consumers who want to own a car, electric cars have been a last resort. There was a limited choice of models. Sales to businesses and governments accounted for a major share of sales.

The market started to change in 2020. Driven by high-end brands such as Tesla, more competitive models have been launched, promoting the rapid increase in private EV purchases.

Across the country, cities without license plate restrictions have increasingly been the key growth areas for NEVs. Cities with license plate limits have played a key role in opening up the NEV market, but their capacity is limited. Sales in cities without restrictions have no ceiling and will have much more room for growth, said Li Jinyong, executive chairman of the All-China Federation of Industry and Commerce Automobile Dealers Chamber of Commerce.

China has also eyed rural markets to expand NEV sales. Since 2020, the government has implemented multiple policies to encourage automakers to go to the countryside. Ten automakers brought 16 NEV models, mostly with prices of less than 100,000 yuan, for the campaign in 2020. Compared with cities, rural areas have unique advantages for using NEVs. Lower-density living in the countryside makes installation of charging stations easier.

The growth of hybrid sales was slightly faster last year, and the proportion has increased in recent years.

Hybrid cars, with their low cost and no range anxiety – the fear of running out of power on a journey and not being able to find a charging point – meet the needs of ordinary families as an intermediate product in the transition from fossil fuel cars to purely electric vehicles, said Cui Dongshu, secretary-general of the China Passenger Car Association. At the same time, he said, all-electric cars are the ultimate goal for new-energy vehicles.

Japanese automakers are strong in hybrid cars, and the price of hybrid models is generally higher than their fossil fuel versions. “If the hybrid price range drops to the same as or lower than the fuel version, they won’t be able to sell their fuel cars,” an industry participant said.

Domestic brands are racing to launch hybrid cars. Li Auto Inc. started volume production of the Li ONE, its first and only extended-range hybrid model, in November 2019 and sold more than 90,000 units last year.

The China Society of Automotive Engineers projected that the share of hybrid cars among NEVs will expand to 42% in 2025 and 52.5% in 2035. 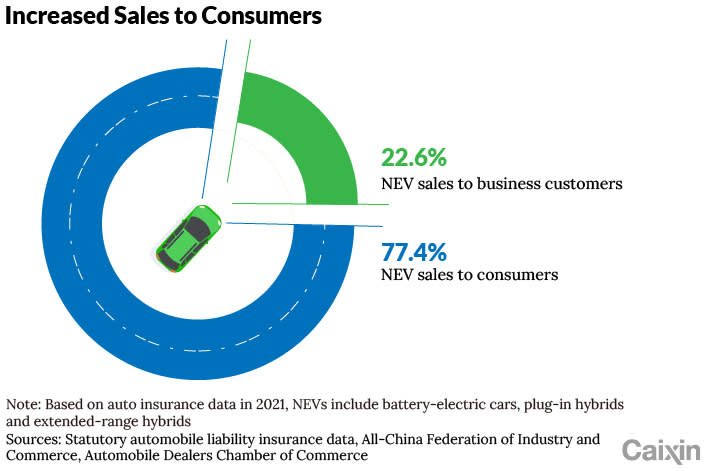 This will be the last year of government subsidies for NEVs. Since 2009, the Chinese government has handed out nearly 150 billion yuan in subsidies for NEVs, creating the world’s largest market. With Tesla, local producers and other global automakers all ramping up NEV production, a competitive ecosystem has grown up in China.

The government will cut NEV subsidies 30% in 2022 and phase them out at the end of this year, according to a notice issued Dec. 31 by the Ministry of Finance and three other ministerial agencies.

Reduced subsidies, together with chip shortages and raw material price increases, have prompted many automakers to raise prices to test market acceptance. Since January, Tesla, Xpeng and BYD have all announced price jumps.

The higher prices show automakers’ confidence in the competitiveness of their products and expectation that consumers will be willing to pay more, senior auto industry expert Wang Ji said. But Zhang Yu, CEO of Shanghai Yuzhi Automotive Consulting Service, said he expected automakers to lower prices after a few months, as the market is very competitive.

Meanwhile, automakers are facing challenges under the dual credit policy. The low value of new-energy credits in the past reduced companies’ incentive to trade in the credits. In 2019, most new-energy credits were traded at less than 500 yuan each.

In June 2020 and February 2021, the Ministry of Industry and Information Technology revised the credit program to raise the threshold for obtaining new-energy credits and encourage the production of fuel-efficient models.

As fossil fuel carmakers that do not meet fuel consumption standards are under pressure to buy credits to offset excessive emissions, the unit price of new-energy credits climbed to 2,000 to 3,000 yuan in 2021 and is expected to reach 5,000 yuan this year, according to Li of the All-China Federation of Industry and Commerce Automobile Dealers Chamber of Commerce. 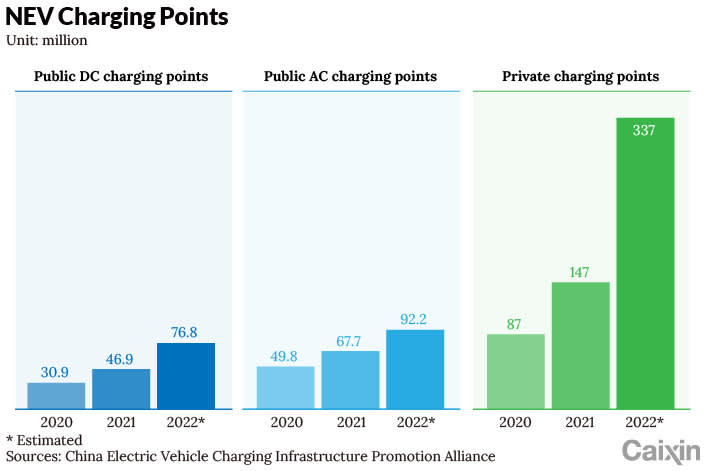 Home charging is the trend

China’s NEV boom has also been supported by the increase in charging facilities. As of the end of 2021, the country had 2.617 million charging points, up 70.1% from 2020, according to the China Electric Vehicle Charging Infrastructure Promotion Alliance. China added 936,000 charging outlets in 2021, including 340,000 public and 597,000 home charging units. The number of new home charging points increased 323.9% from 2020, compared with a 90% increase for public outlets.

China aims to meet charging demand for more than 20 million EVs by the end of 2025, according to a plan released in January by the National Development and Reform Commission (NDRC).

As of the end of 2021, the country had a total of 7.84 million NEVs in use, meaning there was one charging point for every three vehicles. But distribution is uneven across the country, and fewer than 10% of public charging stations are being used.

But it remains difficult to install private charging stations in older urban neighborhoods where parking is scarce. The National Energy Administration and the NDRC are drafting a guideline to build charging centers in communities, a person close to the policymakers told Caixin.

It will be hard to rely solely on the public sector to resolve the problem, said Zhou Wei, director of the NEV research department at the government’s China Automotive Technology and Research Center in Tianjin. With the increase of NEVs, there is room for commercial EV charging and property management businesses to profit from collaborating on solutions, Zhou said. 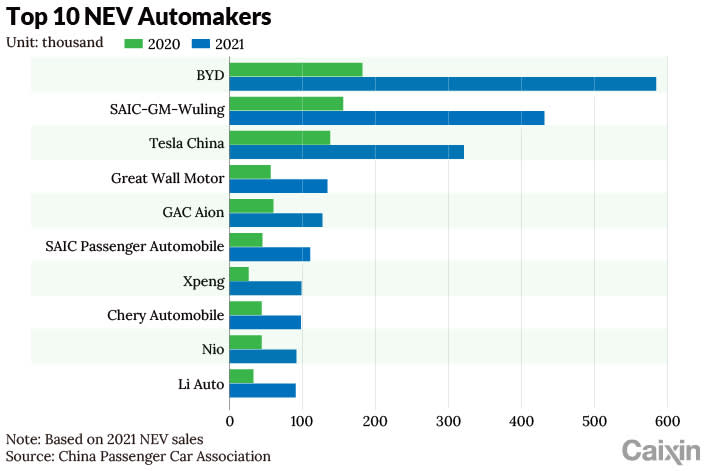 The robust outlook hasn’t been reflected in the stock market. Funds’ fourth quarter performance showed that star fund managers have clear differences in their new-energy investment strategies. Some significantly added positions, while others reduced their exposure.

Several fund managers and NEV industry analysts told Caixin that institutional investors are mainly concerned about NEV stock valuations and lithium supplies. A private equity investor said the compound annual growth rate of 20% is very difficult to sustain. Once the growth rate falls below 20%, companies’ expansion will not be able to keep up with the high valuation of their stocks, the investor said.

China’s spot price for battery-grade lithium carbonate, the key material used to power electric cars, hit a record high on the last day of trading in 2021, ending the year with a more than fivefold annual increase. The price has continued to rise this year.

A trader from Qinghai told Caixin that the lithium supply is tight, with some sellers holding on to the material to wait for even higher prices. Guotai Junan Securities researchers projected that lithium prices will surge again in February, when many downstream companies are likely to build up inventories.

With lithium prices blowing past records, there is a growing risk that raw material inflation could soon create headwinds for the burgeoning NEV industry. Bloomberg predicts a 2% rise in battery pack prices this year, potentially pushing out the point at which electric vehicles will reach cost parity with conventional cars to 2026.

U.N. human-rights chief due to arrive in China for historic…